All cooperators are invited to a presentation by special guest
Dr. Jessica Gordon-Nembhard

“African American Cooperatives and the Struggle for Economic Justice” 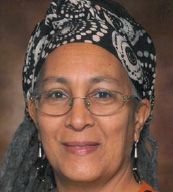 Dr. Jessica Gordon-Nembhard, Professor at John Jay College, CUNY; and Author of Collective Courage: A History of African American Cooperative Economic Thought and Practice, will discuss the history of cooperative economics in the movement for civil rights, and the importance of establishing collective economic entities in African American communities. She argues that the African American co-op movement started when Africans were first forcibly enslaved in the US, and that Black co-ops have existed continuously throughout US history both for economic survival and as strategies for Black liberation. She notes that most African American leaders have had some relationship to cooperatives, and that especially during times of economic downturn as well as times of political turmoil and Black pride, consumer, producer, worker, and housing cooperatives as well as credit unions have flourished in Black communities.

Dr. Gordon-Nembhard is a cooperative ambassador, economist and community economic development expert. She was one of three cooperators inducted into the Cooperative Hall of Fame in May 2016, by NCBA and CDF (Cooperative Development Foundation). After 15 years of careful research, she published “Collective Courage: A History of African American Cooperative Economic Thought and Practice” in 2014. Her book argues that co-ops not only should be, but have historically been a social justice tool within African American communities.

Her research has focused on community and asset-based economic development and democratic community economics; cooperative economics and worker ownership; racial and economic wealth inequality and wealth accumulation in communities of color, and alternative urban economic and youth educational development strategies. She is on the board of several local and national social justice and cooperative development organizations such as Green Worker Cooperatives in the South Bronx, the Southern Reparations Loan Fund, and the international association of Cooperative Educators.

And she is a proud mother and grandmother.

2016 Inductee into the US Cooperative Hall of Fame (www.heroes.coop) Affiliate Scholar, The Centre for the Study of Co-operatives, University of Saskatchewan (Canada)

For questions and/or transportation, please call the Education Office at 718-796-9300, or you may send a message to parkreservoir@aol.com.