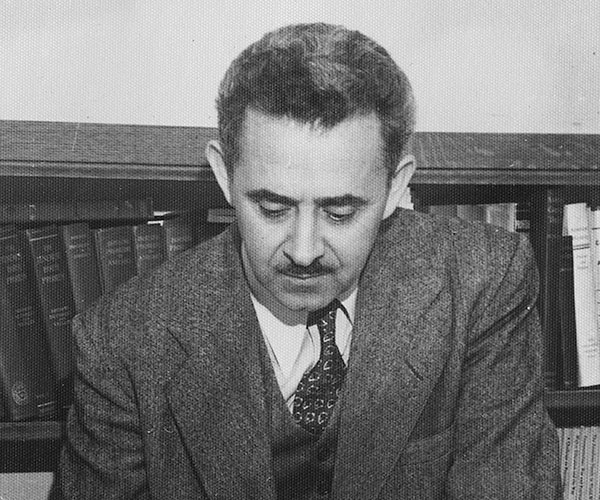 The accompanying article was written in 1981, when Herman Liebman received the Abraham E. Kazan Award as Outstanding Cooperative Educator. To truly appreciate Herman, read his writings, some of which appear elsewhere on this website.

Born with the century in Russia, Herman Liebman came to the United States as a youngster and brought his fiddle with him. After high school, Liebman was accepted by both Yale University and the Juilliard School of Music. He chose Juilliard School, a decision which later benefitted countless cooperators, as Herman Liebman made use of his Juilliard ties and knowledge of music to bring the highest quality musicians to the Amalgamated’s Vladeck Hall, where they were heard either for free or for a nominal donation.

Liebman was drawn to the Bronx Amalgamated by Abraham Kazan, whose son he had taught violin. Kazan hired Liebman as Education Director, and Herman began the job in January, 1930. He continued to serve in that capacity, organizing community activities and editing the Community News, until 1935, when he took another job with ILGWU’s Labor Stage and Unity House.

In 1941, Liebman returned to the job of Education Educator of the Amalgamated Houses. When the Amalgamated doubled in size in the early 1950’s, activities flourished. The neighborhood was flourished with children, and there were dance classes, music classes, art classes, junior olympics, scouts, ceramics and much, much more.

There were individual cooperators or committees to run the programs, but always there advising, encouraging, guiding, cajoling was Herman Liebman. A drama club, book club, men’s club, even a co-op orchestra, all had their years of activity, all functioning under the aegis of the education department. Circle Pines day camp, with Camp Director Herman Liebman, had more than 400 children of cooperators during some years of the 1950’s.

In addition to his cultural talents, Herman Liebman has also been a teacher and preacher of the cooperative ideal. His articles, through 50 years of Community News, have goaded cooperators to live within the spirit of cooperation. In person, Herman would shout or charm, always with the same purpose – the furtherance of Cooperative Spirit. As part of the education program, lectures and discussion forums were arranged on philosophy, politics, literature, poetry, art, cooperatives, health – anything which would serve cooperators and stimulate the human intellect.

There is too much in Herman Liebman’s career for one brief article. Education of new cooperator’s, service at the United Nations (1973-75) on behalf of the International Cooperative Alliance, and much more! Liebman is still active in our education and culture. For the Amalgamated since 1930, and Park Reservoir since 1956, it has been more than fifty wonderful years.

It is fitting that Liebman be honored in Kazan’s name. They were partners during the decades of their most productive work, building together the physical and spiritual communities that mean so much to the thousands of cooperative families who live in them. They are the pioneers of cooperative living that lies ahead.