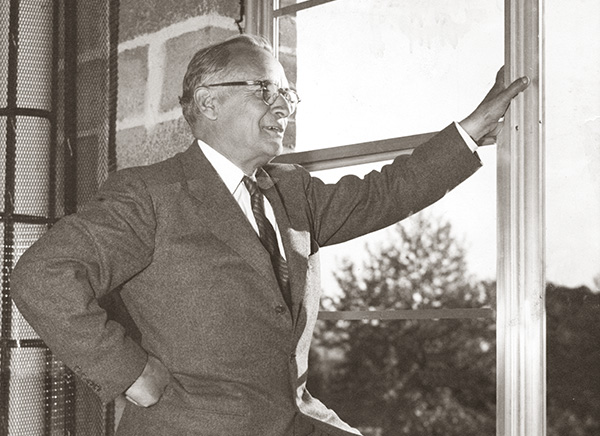 Abraham E. Kazan earned the title, “Father of cooperative housing in the United States” and was one of the original inductees into the Cooperative Hall of Fame. As president and manager, he nurtured Amalgamated Houses, his first cooperative, through infancy, through the Depression, through major expansion around 1950 to a stable, secure housing co-op. He created United Housing Foundation and was first president of Park Reservoir, the first state Mitchell Lama.

Abraham Kazan combined the vision of a socialist-idealist with the fiscal discipline of a conservative businessman. Simply put, there would be no Amalgamated or Park Reservoir were it not for Mr. Kazan. For that matter, it is likely that little if any limited equity cooperative housing would have been created had not Kazan provided the model.

The Obituary from the New York Times provides a broader perspective on his achievements.

Abraham Eli Kazan, who pioneered and developed much of the middle‐income cooperative housing in New York City, died yesterday at Beth Israel Hospital. He was 82 years old.

Mr. Kazan’s accomplishments in housing ranged from the nation’s first cooperative project, in 1927, the Amalgamated Houses on Van Cortlandt Park South in the Bronx, which was Mr. Kazan’s idea, to the mammoth Co‐op City project in the East Bronx, which eventually will provide low‐cost housing, for 60,000 people.

Each project was the biggest and the first in its field at the time, featuring low prices and rents, and luxuries such as central air‐conditioning, parquet floors, balconies and gardens.

Spurred by a boyhood spent in Lower East Side tenements, Mr. Kazan’s houses brought co operative ownership, solid construction, sunlight, fresh air and gardens into the lives of thousands who had known only fetid, ramshackle tenements.

He was also responsible for the creation of many cooperative food markets, pharmacies and optical services, a furniture center, credit unions and other cooperative enterprises. Each is known as a “Co-op” and is identified by the trademark of the United Housing Foundation, two green pine trees standing side by side in a circle.

Mr. Kazan retired in 1967 as president of the housing foundation, a nonprofit federation of housing cooperatives, civic associations, trade unions and other nonprofit organizations that he helped to organize in 1951.

Governor Rockefeller once lauded him as a man who “could have gone into private business for himself and made a fortune.”

“I am a co‐operator,” Mr. Kazan replied, “interested only in building the cooperative commonwealth.”

Mr. Kazan headed the Amalgamated housing projects from 1926 until 1951, when, with Louis Pink and Robert Szold, he organized the United Housing Foundation and its subsidiary, Community Services, Inc.

It was under foundation auspices that he built Rochdale Village, a pioneer effort in terms of size and in its intention of integrating thousands of white families into a black neighborhood.

By utilizing low‐cost loans from the New York State Housing Finance Authority, he was able to put up 5,860 units on the site of the old Jamaica Racetrack.

One foundation official said, “The housing and the price were so good, the people could not afford to indulge their prejudices.”

Serious music was his major pastime. “I probably pass nine tenths of my free time listening to music,” he once said. “I have 400 albums and 1,000 of the older records.”

Mr. Kazan came to New York at the age of 13 in 1904 from Kiev in Russia, and followed his immigrant parents to the slums of the Lower East Side. In a few years he was running errands for the International Ladies Garment Workers Union, and was deeply committed to the workers’ movement.

After World War I, when he had risen to clerk, he persuaded the union to combat inflated food prices by buying and selling sugar and matzohs at cost to members.

His experience taught him the value of cooperative effort, and he began to turn his attention to housing. While manager of the Amalgamated Clothing Workers Credit Union, he persuaded them to finance the historic Amalgamated Houses, a novel concept in which workers paid $500 a room and an $11‐a‐month carrying charge for well‐built housing in a comfortable setting. For 1927, it was revolutionary.

During a typical day, Mr. Kazan would leave his home at 7:45 a.m., inspect a construction site, and then head for his office at 570 Grand Street on the Lower East Side. There, with three or four assistants, he would plan, finance, and schedule each project down to the slightest detail.

As president of the United Housing Foundation, Mr. Kazan pushed and bullied unions, private capital, the city and state for his co‐op projects.

Mayor Robert F. Wagner once described him as a “hard man where a dollar, or even a penny, is concerned.”

Mr. Kazan was frequently involved in feuds with Consolidated Edison, whose rates he considered too high.

In the case of Co-op City, he persuaded Con Ed to provide special “extra wholesale” rates.

“Why should people pay a profit to someone else when they can provide themselves with good service and pay the profits to themselves?” he asked. “We are protesting a profit‐hungry monopoly which gets rate increases as regularly as clockwork.”

Critics of his later projects, whose design was criticized as monolithic and sterile, were often met with this Kazan rejoinder:

“We are not only demolishing rattraps and building decent homes, we are giving people the opportunity to let the sun into their apartments and enjoy gardens and trees.